We, the editorial team of Text Matters: A Journal of Literature, Theory and Culture, regret to announce that Professor Dorota Filipczak, the journal’s Editor-in-Chief, has passed away. She was recognised for her work on Canadian literature, postcolonial literature, and feminist philosophy of religion. She was a noted poet, and published seven volumes of poetry. She was also a translator of literature into Polish. We will seek to continue her legacy, and do our best to ensure the ongoing development of the journal which she founded ten years ago, and which was a key part of her academic work. She will never be forgotten.


Dorota Filipczak was an Associate Professor in the Institute of English Studies at the University of Lodz, Poland. She was the head of the Department of Canadian, Intermedial and Postcolonial Studies, which she established herself.

She was a graduate of the University of Lodz. Although in her own research she focused on contemporary writing in English, especially Canadian literature (in the 1990s she was a precursor of Canadian Studies in Poland), she was also interested in the literatures of Australia, New Zealand, Africa, Asia and the Caribbean. Other research interests included the feminist philosophy of religion. Her doctoral thesis (1996) was published as The Valley of the Shadow of Death: Biblical Intertext in Malcolm Lowry’s Fiction in a special issue of The Malcolm Lowry Review (Wilfrid Laurier University Press, Waterloo, Ontario, 1998/1999). Her postdoctoral dissertation was devoted to the work of Margaret Laurence, one of the most important Canadian writers (Unheroic Heroines: The Portrayal of Women in the Writings of Margaret Laurence, Nicolaus Copernicus University Press, Torun, 2007). In 2008 she received the postdoctoral degree and became an Associate Professor. Her interests in Canadian Studies were continued in a monograph entitled Brian Moore’s Eponymous Heroines: Representations of Women and Authorial Boundaries (Peter Lang, 2018). The editors of the prestigious 31-volume Polish encyclopedia (Wielka Encyklopedia PWN) entrusted her with writing entries on the literatures of Canada and New Zealand. With Agata Handley, she edited Bringing Landscape Home in the Writings of Jane Urquhart (Lodz University Press, 2010), a collection of essays resulting from the Canadian writer’s visit to Poland and a conference dedicated to her work.

Professor Filipczak was a world-renowned scholar, invited to deliver lectures at universities in Durham, Glasgow, Sheffield, York, Coleraine, Winnipeg, Oxford, Beersheba and Barcelona. She also conducted her research at universities in Strasbourg, Berlin, Toronto, Calgary, Montreal, Edmonton, Vancouver and Peterborough. She was among the recipients of the International Council for Canadian Studies grant. Between 1999 and 2002 she sat on the Advisory Board for Literature and Theology, a journal published by Oxford University Press. She was a member of the Polish Association for Canadian Studies. She collaborated with prominent scholars from around the world, such as Pamela Sue Anderson, Mieke Bal or Aritha van Herk.

Dorota Filipczak was also a poet and a translator. She published seven volumes of poetry, including Trzecie skrzydlo aniola (1995), K + M + B (2009), and Wieloswiat (2016). In 2017 the Association of Polish Writers (Stowarzyszenie Pisarzy Polskich) published a selection of her poems written between 1994 and 2016, entitled Rozproszone gniazda czulosci. She authored the Polish translation of Nadine Gordimer’s novel The House Gun (Bron domowa, Proszynski i S-ka, 1999). Her translations and reviews appeared in Literatura na Swiecie, Tygiel Kultury, Fraza and Odra. For Literatura na Swiecie – one of the most renowned Polish journals publishing world literature – she translated Malcolm Lowry’s novella “The Forest Path to the Spring” (“Lesna sciezka do zrodla”), excerpts from John McGahern’s novel The Dark (Pomroka) and from Peter Ackroyd’s biography of Charles Dickens, as well as pieces by Sandra Birdsell, Carol Shields and Ethel Wilson.

A vital aspect of Dorota Filipczak’s rich academic career was the prestigious journal Text Matters: A Journal of Literature, Theory and Culture, which she founded in 2011. A significant portion of every issue, beginning with the first, has been devoted to Canadian literature and culture, postcolonial literature, as well as philosophy and feminism – subjects about which Professor Filipczak was passionate. Under her editorship, Text Matters quickly became recognizable in the academic world, and after a few years was awarded 70 points on the Ministry of Science and Higher Education’s master journal list. By design, Text Matters is interdisciplinary and multivocal: Dorota Filipczak envisioned it as a forum for academics from around the globe. This is what motivated her to ensure that the Advisory Board was composed of illustrious scholars of literature and culture from countries as diverse as Canada, the United States, the United Kingdom, Switzerland, the Netherlands, India or Australia. The issue marking the journal’s 10th anniversary, “Literature Goes Pop,” was published in the fall of 2020. It engages with a number of subjects associated with popular culture, particularly intertextuality in music videos, which was Professor Filipczak’s research focus in recent years.

We are delighted to announce that the 10th issue of Text Matters will be released later this month. Edited by Prof. Dorota Filipczak, it consists of 26 scholarly texts, organised into two main sections: Literature Goes Pop, and Literar(t)y Matters. The first opens with an article by our special guest, Prof. Mieke Bal (University of Amsterdam), in which she discusses the intricacies of the essay / essay film. Other notable contributions include Prof. Liam Gearon’s (University of Oxford) take on Bob Dylan’s life and career, as well as Prof. Christine Nicholls’s (Australian National University, Canberra) richly illustrated and up-to-date analysis of intertextuality and interpictoriality in humour, in the time of COVID-19. 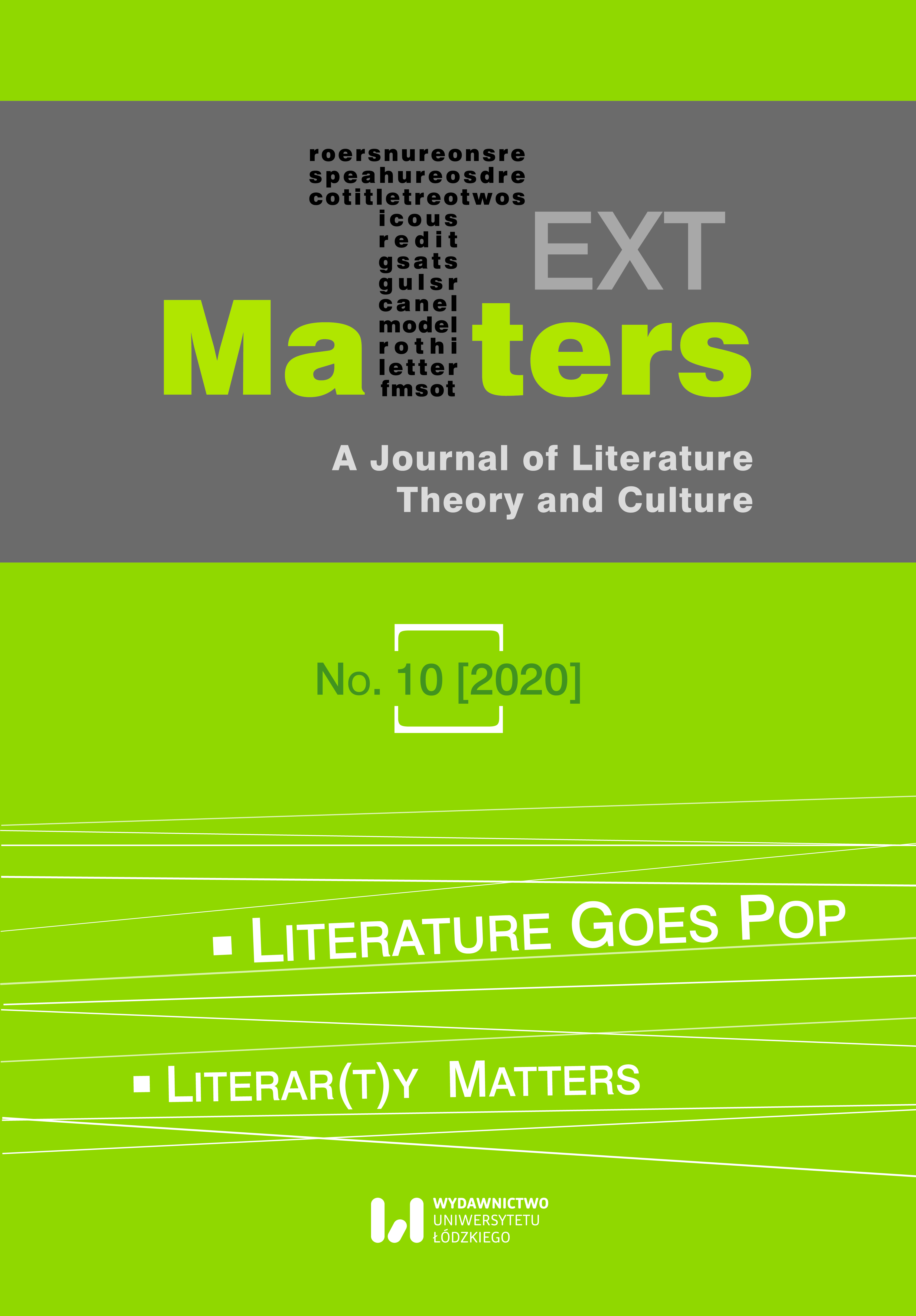 On 11th January 2018, Text Matters launched its 7th Issue, on Theatre Studies and Performative Arts, with a special event entitled "Greek Drama on the British Stage." This event was co-organised with Dom Literatury w Łodzi (House of Literature, Lodz). It began with a panel discussion featuring scholars from the University of Lodz, including Dorota Filipczak, Andrzej Wicher, Malgorzata Budzowska, Magdalena Cieslak and Agata Handley. The panel was followed by a rehearsed reading of excerpts from modern British translations and versions of Greek drama, including 'Greek' by Steven Berkoff; 'The Restless House' by Zinnie Harris; and 'The Oresteia' by Aeschylus (in a version by Tony Harrison). The extracts were performed by our special guests from the UK: Bruce Coates, Claire Best and Wesley Rolston from the Drama Department, Newman University. The director was David Allen from Midland Actors Theatre (UK).

The event was featured on a local television arts programme. Click here to view the local news coverage (in Polish)

Printing is not supported at the primary Gallery Thumbnail page. Please first navigate to a specific Image before printing.